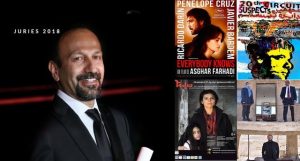 The Iranian director will attend the event as the residing jury for the International Feature Competition Program.

The 15th section of Golden Apricot Yerevan International Film Festival will be held July 8-15, 2018 and four Iranian films including “20th Circuit Suspects”, “Yeva” and “With No Shadow” are scheduled to screen at the event.

“20th Circuit Suspects” by Hesam Eslami will compete in the documentary section with 10 other films.

In 2011, Mr. Farhadi won the best film award at the Golden Apricot for his film “A Separation” and this year, his new Spanish-language film “Everybody Knows” will be screened at the non-competition section of the festival.

Sorry. No data so far.